In honor of Queen Elizabeth II's Platinum Jubilee marking her 70 years on the British throne, the BBC will air a documentary that includes previously unseen footage of the monarch as a young princess beaming with delight as she admires her new engagement ring.

Elizabeth: The Unseen Queen features a clip of Prince Philip's first extended visit to Balmoral — the Scottish holiday home of the royal family — in 1946, when the future queen was 20 years old and the couple's engagement was still not public. Princess Elizabeth can be seen smiling and showing the camera the 3-carat round diamond ring.

The center stone and 10 accent diamonds used in the platinum ring crafted by London jeweler Philip Antrobus Ltd. were harvested from a tiara owned by Prince Philip's mother, Princess Alice of Battenberg, who was Queen Victoria's great-granddaughter. The remaining diamonds from the tiara were made into a wide bracelet that Philip gave Elizabeth as a wedding gift. 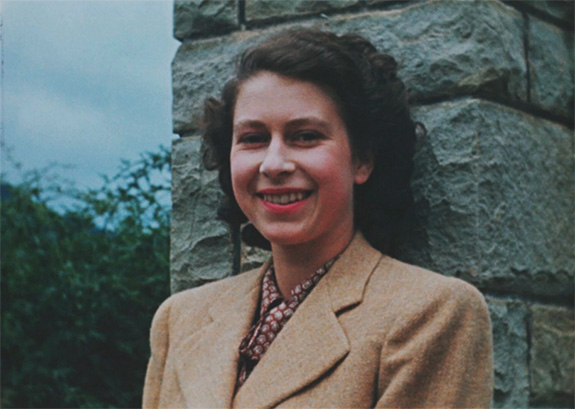 According to Town and Country, the diamonds in Elizabeth's new jewelry dated back to the very end of the Romanov dynasty. Philip's mother had been given the tiara on her wedding day by Tsar Nicholas II and Tsarina Alexandra of Russia, the last rulers of the Russian Empire. It turns out that Princess Alice was a distant relative of the Russian monarchs.

The documentary will follow the monarch's life as a princess through her own eyes and her own words. The BBC has been granted special access to hundreds of private home movies shot by the Royal Family. It covers the Queen's life from childhood through her wedding in 1947 and concludes with her coronation at the age of 27 in 1953.

Elizabeth and Phillip where married for 73 years. The Duke of Edinburgh died in April 2021, just a few months before his 100th birthday. The Queen turned 96 on April 21.

BBC Studios reviewed more than 400 reels of film, privately held by the Royal Collection in the vaults of the British Film Institute (BFI). Filmmakers also listened to over three hundred of the Queen's speeches across 80 years.

"This documentary is an extraordinary glimpse into a deeply personal side of the Royal Family that is rarely seen," said Simon Young, the BBC's commissioning editor for history, "and it's wonderful to be able to share it with the nation as we mark her Platinum Jubilee."

The documentary will debut on BBC One and BBC iPlayer on May 29.