Sparkling with 282 diamonds and 51 sapphires, the St. Louis Blues' first-ever Stanley Cup rings pay tribute to the strong bond between the players and their dedicated fans. The impressive 14-karat white and yellow gold rings — which boast a total gem weight of 10.6 carats — were recently presented to the players, coaches and executives by local police and firefighters during a private ceremony. 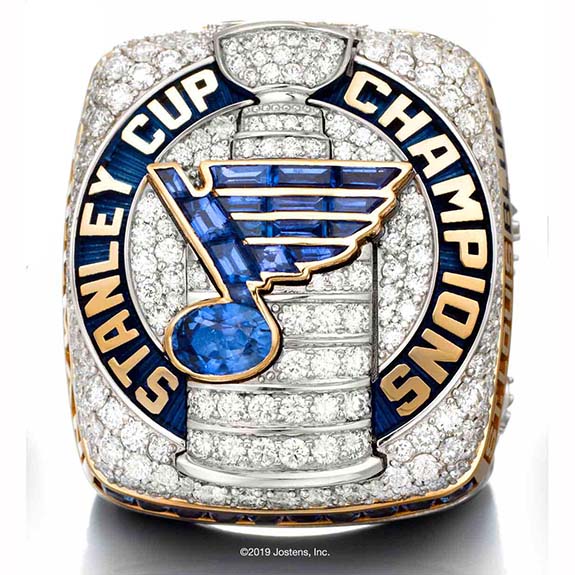 Founded in 1967, the St. Louis Blues and their fans waited 52 years to raise the Stanley Cup.

Designed by Jostens, the ring face features the Blues' distinctive Blue Note logo rendered with 16 genuine, custom-cut blue sapphires. The number 16 represents the number of victories earned by the Blues on their path to the championship. Jostens reported that each sapphire had to be delicately shaved so each would fit exactly within the logo's yellow gold outline.

The Blue Note logo sits atop the Stanley Cup, rendered with 45 pavé-set diamonds. To the left and right of the Cup are 30 more diamonds for a total of 75 — a number representing the goals scored by the Blues during the 2019 postseason.

The words "STANLEY CUP CHAMPIONS" in raised gold lettering encircle the face of the ring and sit against a ground of custom blue antiquing. Completing the top's stunning design are 115 additional diamonds intricately set in a cascading waterfall effect.

A total of 20 princess-cut sapphires — channel set in yellow gold — wrap around two sides of the ring's top edge. One of the remaining two sides features the player's name in raised yellow gold lettering, and the fourth side showcases the words "ST. LOUIS BLUES" with "ST. LOUIS" in raised gold letters and the word "BLUES" colored with blue antiquing.

Intricately detailed music notes for the song “When the Blues Go Marching In” are featured on the right side of the ring. The music notes flow through the iconic St. Louis Arch, formed by 16 diamonds, again representing the number of victories earned in the playoffs. According to Jostens, the scene is inspired from photos taken from an overhead blimp during the city’s championship parade celebration. A mix of 76 diamonds and 15 sapphires symbolizes the huge crowd that surrounded the stage during the city's celebration.

The results of the each playoff series and the opponents' logos are engraved on the interior of the ring, along with the Blue Note logo. Below the scores is an engraving of the player's personal signature. Also on the interior is the name "LAILA," an 11-year-old superfan who suffers from a rare, life-threatening disease. Laila Anderson was a season-long source of inspiration for the team.

The palm crest reads "PLAY GLORIA," a nod to the Laura Branigan song that was played after the team's home victories.

“The Blues journey to become Stanley Cup Champions for the first time was nothing short of extraordinary," said Chris Poitras VP and COO of Jostens Professional Sports Division, "and we wanted to honor that story through an equally incredible ring."