Tanzanite, one of December's three official birthstones, is celebrating its golden anniversary. Fifty years ago, Maasai tribesmen discovered dazzling bluish-violet gems in the foothills of Mount Kilimanjaro in Tanzania. Originally thought to be sapphires, the mesmerizing stones were identified by the Gemological Institute of America as a never-before-seen variation of zoisite. 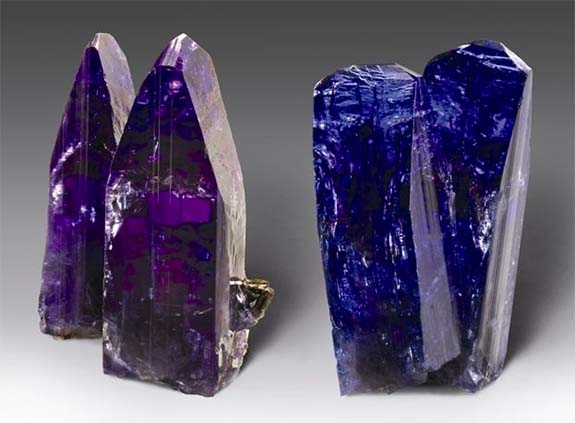 The unusual mineral caught the attention of Tiffany & Co., which had visions of making it the focus of a major advertising campaign. An initial challenge was that the name “zoisite” sounded very much like “suicide,” so the marketing team at Tiffany came up with “tanzanite,” a name that would honor the gem's country of origin. To this day, a 2km by 4km area in Tanzania is the only place on the earth where this type of zoisite can be found.

Tiffany’s marketing campaign succeeded in making tanzanite a household word and earned it the title of “Gem of the 20th Century.”

In 2002, the American Gem Trade Association added tanzanite to the jewelry industry’s official birthstone list. Tanzanite joined turquoise and zircon as the official birthstones for December. It was the first time the list had been amended since 1912.

Tanzanite’s exquisite color is an intoxicating mix of blue and purple, unlike any other gemstone. Tanzanite comes in a wide range of hues, from light blues or lilacs, to deep indigos and violets. The most valuable tanzanite gemstones display a deep sapphire blue color with highlights of intense violet. The Smithsonian’s website explains that tanzanite exhibits the optical phenomenon of pleochroism, appearing intense blue, violet or red, depending on the direction through which the crystal is viewed.

Due to its single source and limited supply, promoters of tanzanite say that the gemstone is one thousand times rarer than a diamond.

The Smithsonian in Washington, D.C., houses the "Petersen Tanzanite Brooch," a piece that was designed by Harry Winston in 1991 and donated to the museum by Donald E. and Jo A. Petersen in 2002. The triangular-cut matched tanzanites weigh approximately 30 carats and are adorned by 24 carats of marquise, pear and baguette-cut diamonds in a floral motif. The tanzanite "flowers" may be detached and worn as earrings.

Tanzanite rates a 6.5 to 7 on the Mohs hardness scale. By comparison, diamond rates a 10 and sapphire rates a 9.