In a wonderful example of serendipity, Jessica and Seth Erickson of Chatfield, MN, mined their own 10th anniversary diamond at Arkansas’s Crater of Diamonds State Park.

The couple had recently embarked on an 11-state road trip to celebrate their anniversary milestone and was excited to schedule a stop at the only diamond site in the world that’s open to the general public. The 37½-acre search field at the Murfreesboro park is actually the exposed eroded surface of an ancient diamond-bearing kimberlite pipe and amateur miners get to keep what they find.

The Ericksons arrived at Crater of Diamonds early on a Friday morning and spent the first few hours of their visit collecting material in the north section of the search field. By 11 a.m. they were wet sifting at the North Washing Pavilion with the assistance of some knowledgeable park regulars.

The regulars offered the Minnesota couple tips on how to properly sift their material using two screens — one with a quarter-inch mesh and the second with a 1/16th-inch mesh. The two-stage sifting process washes away the fine dirt and allows the smaller gravel to fall through the first screen and into the second.

According to park staff, about three-fourths of all diamonds registered at the Crater of Diamonds are found by wet sifting. 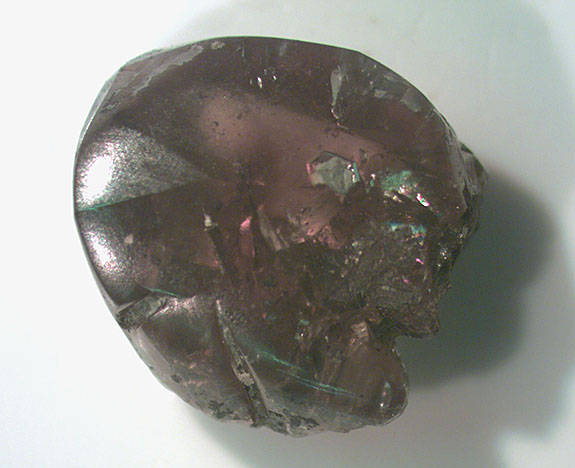 Although most diamonds are found after flipping gravel from the second screen onto a flat surface, Seth first spotted a metallic-looking gem in the bottom of the first screen. He knew right away it was a diamond and excitedly showed Jessica. Diamond, of course, is the official 10th anniversary gemstone.

According to park officials, it is very unusual to catch a diamond in the top screen of a screen set. The mesh size of the top screen is typically used to catch and remove bigger pieces of gravel – not diamonds. The average diamond size found wet sifting is a quarter of a carat. Typically, larger diamonds are found by surface searching.

The Ericksons placed their tea-color gem in a clear vial and walked it to the park’s Diamond Discovery Center, where park staff registered it as a 1.90-carat brown diamond about the size of a pony bead, a glass or plastic bead often used in children's crafts.

Many people who find diamonds at Crater of Diamonds State Park choose to name their gems. The Ericksons called their gem "HIMO," derived from the initials of each of their children.