407-Carat 'Incomparable' Gets Reshaped and Renamed Before Heading to Auction

The reimagined “Incomparable Diamond," now sporting a classic pear shape and slimmed down to 303.10 carats to reveal a deeper color, brighter hue and improved profile, will be introduced as "The Golden Canary" when it hits the auction block at Sotheby's Magnificent Jewels event in New York on December 7. 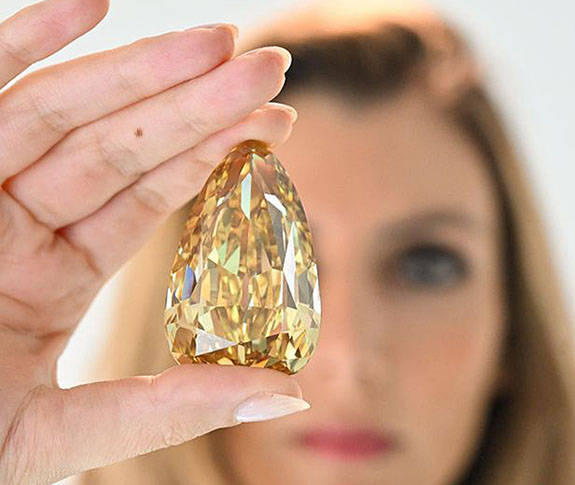 In a bold move, the auction house is offering the famous diamond without reserve. Experts believe the massive stone — one of the largest polished diamonds in the world and the largest internally flawless diamond ever graded by the Gemological Institute of America — will sell for $15 million or more.

The original 407-carat, shield-shaped, step-cut Incomparable Diamond had been cut from an 890-carat rough gem discovered by a young girl in the Democratic Republic of Congo in the early 1980s. She reportedly scooped up the stone from a pile of rubble collected from an old mine dump. The diamond had been overlooked because it was mixed in with the bulky rubble thought to be too large to contain any diamonds.

The girl gave the stone to her uncle, who then sold it to local diamond dealers. Given its enormous size, cutters originally intended to shoot for a record-breaking finished stone that would outweigh the Cullinan I (530.20 carats). But as the project progressed, the cutters decided to forego the record. The final size was reduced to 407 carats in order to earn a flawless grade. The original rough diamond also yielded 14 satellite finished gems ranging in size from 1.33 carats to 15.66 carats.

The fancy, deep brownish-yellow Incomparable Diamond became an instant sensation. The gem has attracted crowds at famous museums around the world, including a six-week stint at the Smithsonian’s National Museum of Natural History in Washington, DC, in 1988.

Sotheby's noted that vastly improved computer modeling and cutting technology contributed to the decision to trim the gem by more than 100 carats. The goal was to maximize its depth of color, brighten its hue and improve its shape.

The GIA described the stone in its monograph: “The re-cut of the Incomparable to the current 303.10 carat pear modified brilliant is to look at the diamond as new; a re-creation bringing to bear the advances in technology, computer modeling and visual evaluation available today. Everything from the orientation of the stone, to its shape and cutting style, has been considered.”

"Steeped in history, The Golden Canary is one of the most exquisite diamonds to ever be discovered, not only for its sheer size and intensity in color, but for its stunning beauty that is sure to captivate collectors around the world," noted Quig Bruning, Sotheby’s Head of Jewelry for the Americas. "Sotheby’s is privileged to help write the next chapter for this incomparable, reborn gem.”

The Golden Canary is embarking on a worldwide tour that will include appearances in Dubai, Taipei, Geneva, Hong Kong before returning to New York for the auction.