Eight ultra-rare, fancy blue diamonds ranging in size from 1.22 carats to 11.29 carats and collectively worth more than $70 million will headline Sotheby's Magnificent Jewels auctions in New York, Geneva and Hong Kong. Three of the stones will be offered for sale by the end of this year, and the rest will hit the auction block in early 2023. 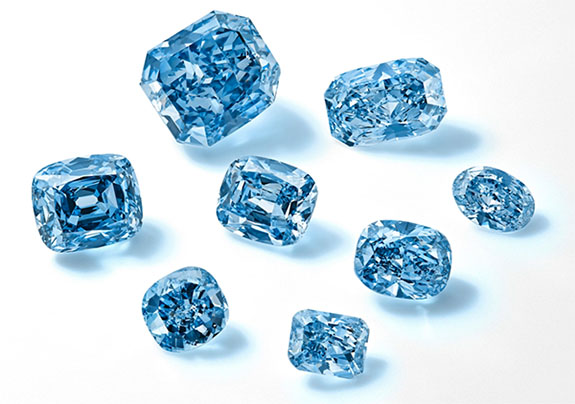 "The De Beers Exceptional Blue Collection" includes blue diamonds of various shapes and weights totaling 32.09 carats. The diamonds were sourced at the historic Cullinan mine in South Africa, the same mine that produced the De Beers Blue, a 15.10-carat step-cut, fancy vivid blue diamond that fetched $57.5 million at Sotheby's Hong Kong in April 2022.

In November 2020, De Beers and Diacore jointly purchased five rare blue rough diamonds from the Cullinan mine that weighed a total of 85.62 carats. Over a period of nearly two years, Diacore meticulously cut and polished the five roughs — ranging from 9.61 to 25.75 carats — and transformed them into the eight-piece collection you see, above.

Each of the polished gems share the name "De Beers Exceptional Blue" and is distinguished by a number that represents its carat weight.

For instance, the De Beers Exceptional Blue 5.53, with an estimated sale price of $11 to $15 million, will highlight Sotheby’s Magnificent and Noble Jewels auction in Geneva on November 9.

The other five diamonds from the collection are slated to be sold during the Spring of 2023.

"Nearly six months after we set a new benchmark for one of the highest prices achieved for a blue diamond at auction with the $57.5 million sale of the De Beers Blue, we are honored to be entrusted with this superb collection of fancy blue diamonds," commented Quig Bruning, head of Sotheby’s Jewels, Americas. "Also recovered from the historic Cullinan mine in South Africa, the De Beers Exceptional Blues are a true testament of our world’s most extraordinary treasures and what is yet to be discovered."

Here's the full list of the diamonds of The De Beers Exceptional Blue Collection, from largest to smallest:

The De Beers Exceptional Blue Collection just embarked on an international publicity tour that starts in Hong Kong (October 17-19) and will move on to Singapore (October 20-21), Taipei (October 26-27) and Geneva (November 4-8).

Blue diamonds are considered one of the rarest colors of all diamonds. A fabulous fluke of nature, a blue diamond is produced by the random presence of the element boron within the diamond’s carbon structure.

Scientists believe that blue diamonds form about 400 miles below the surface, four times deeper than about 99 percent of all other diamonds.