Exactly 731 gemstones weighing a total of 18.50 carats are artfully arranged in a breathtaking 14-karat white gold ring that tells the story of the Colorado Avalanche's franchise and the team's exciting march to the NHL 2022 Stanley Cup championship. 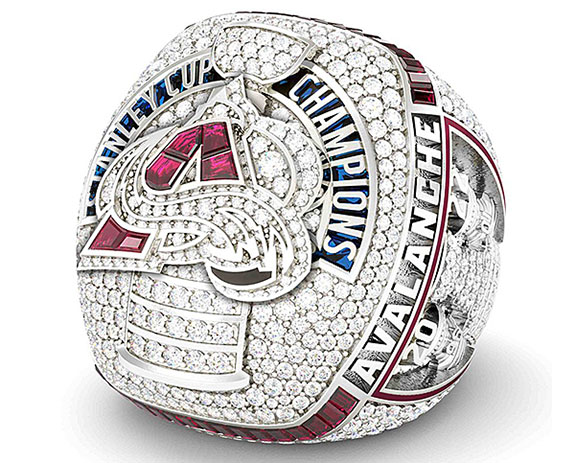 The team's players, coaching staff and owners received their rings in a private ceremony just ahead of the season opener, which took place last night against the Chicago Blackhawks at Ball Arena in Denver.

“We wanted to bring the Avalanche’s championship journey to life, and this ring tells that story beautifully," said Chris Poitras, VP and COO of Jostens Professional Sports Division.

The ring is teeming with unique details that depict the team's championship journey.

The ring top features the distinctive Avalanche mountainous “A” logo and the title of STANLEY CUP CHAMPIONS in raised gold lettering above 18 custom-cut sapphires. Creating the "A" are six custom-cut rubies, symbolic of the exciting six-game Stanley Cup Final victory over the defending champion Tampa Bay Lightning.

Paying homage to Joe Sakic’s lifetime commitment to the Avalanche, as well as his distinction of being the only team captain and general manager to win a Stanley Cup with the same team, 19 diamonds are set in the snow that flows to the black hockey puck on the logo (Sakic's jersey number was 19). These diamonds have a total weight of .22 carats, a nod to the 22 years of Kroenke ownership.

An additional 220 diamonds are intricately set, cascading down the ring top. A design element from the team’s jersey is brought to life along the top and bottom edges of the ring top through custom-cut rubies set in the pattern of the “mountain” stripe detail found on their jersey. Thirty-six rubies are set in the stripes. 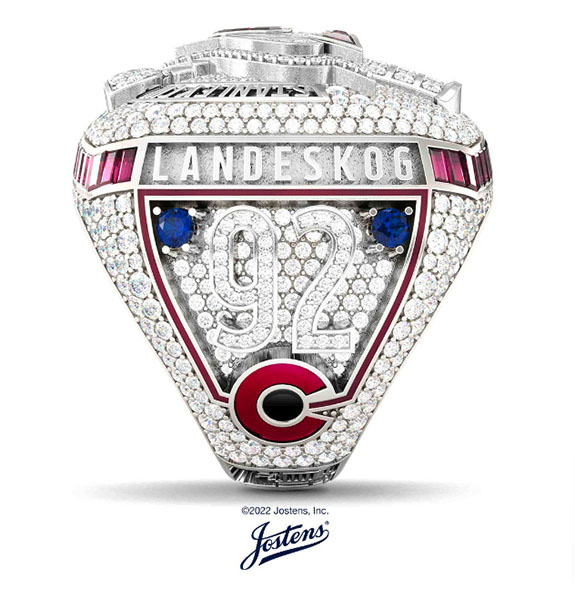 The left side of the ring features the player’s name in raised white gold. Below the name is the player's jersey number set in diamonds. Set on either side of the player’s number are two sapphires, symbolizing the team's ’96 and ’01 Stanley Cup victories. Completing the left side is a representation of the team's alternate "C" logo, which is seen on the shoulder of the team’s home jersey. The alternate logo is accented with black ceramic – a nod to the team's most recent Stanley Cup title. The background of the left side is a shimmering ground of 80 diamonds. 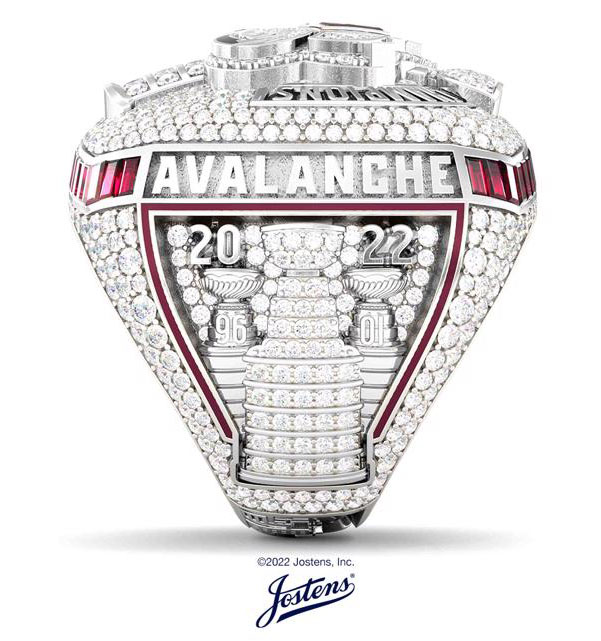 Displayed at the top of the right side of the ring is the team’s name created in the official Avalanche jersey font. Below are three Stanley Cups. The largest Cup in the center is set with 44 diamonds. The year-dates of each Stanley Cup title are proudly displayed on the Cups. The background of the right side is completed with 28 diamonds. In total there are 72 diamonds set on the right side. That number is significant because it represents the 72 combined regular season and playoff victories won by the Avalanche during the championship season. This accomplishment tied an NHL record that's been achieved only three times in the league’s 104-year history. 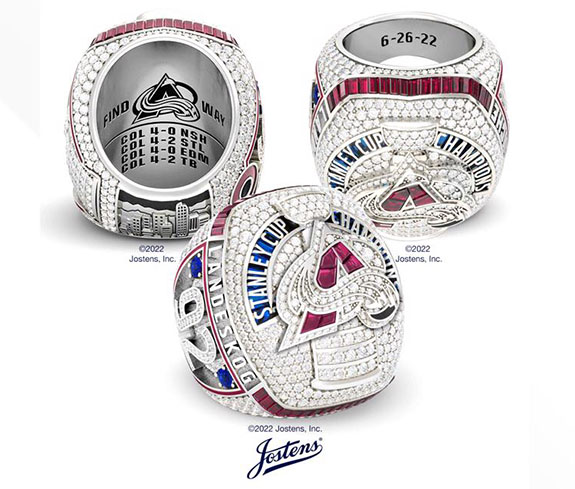 Flowing from the top of the ring, down the sides and wrapping around the palm are 184 diamonds. The exterior palmside of the ring includes a detailed miniature version of the iconic Denver skyline, a tribute to the team's home city.

The interior of the ring features the team motto “FIND A WAY” with the “A” represented by the Avalanche logo. Below are the series results from the Avalanche’s dominate playoff run. As a final detail, the date of the championship series game six, 6-26-22, can be found on the interior palmside of the ring.