Watermelon Tourmaline Is the Most Delectable Variety of October's Birthstone

There’s an ancient Egyptian legend that describes how tourmalines got their amazing colors, and it goes something like this... On their long voyage up to the surface from the center of the Earth, tourmalines passed through a rainbow — and by doing so, assumed all of its colors. 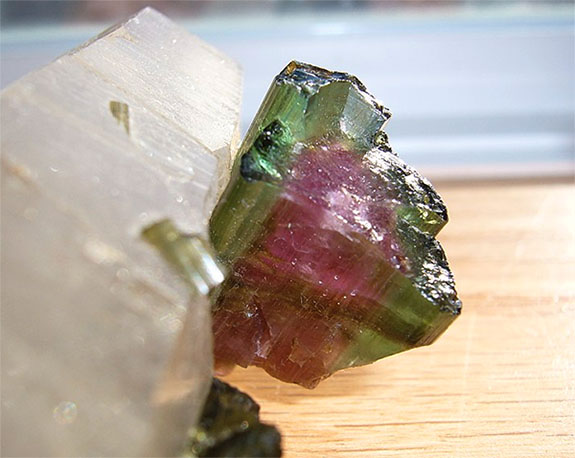 The name “tourmaline” is derived from the Singhalese words “tura mali,” which mean “stone with mixed colors.” In fact, when it comes to color, tourmaline is the undisputed champion of the gemstone world.

Not only does tourmaline come in a wide range of colors, such as blue, red, green, yellow, orange, brown, pink, purple, gray and black, the official October gemstone also boasts bi-color and tri-color varieties. (The other official birthstone for October is opal.)

According to the American Gem Society, the multicolor gems with the clearest color distinctions are the most highly prized.

The trade has unusual names for the wide variety of multicolor tourmalines. According to the International Colored Gemstone Association, colorless crystals with black on both ends is called “Mohrenkopf,” a chocolate-coated marshmallow treat sold in the German-speaking part of Switzerland.

Tourmaline crystals that have banded color zones that lie on top of one another are referred to by the Brazilians as “papageios” or “rainbow tourmaline.” A tourmaline with red on one end is called a “Turk’s head tourmaline.” Apparently, the reference is a nod to the red fez cap made popular in Turkish culture.

Tourmaline is found in many locations around the world, including the U.S. (mainly California and Maine), Brazil, Afghanistan and East Africa.

Tourmalines get their color from trace elements that are introduced to a gem’s chemical structure. Lithium-rich tourmalines yield blue, green, red, yellow and pink colors, while iron-rich tourmalines are black to bluish-black. Magnesium-infused tourmalines tend to be brown-to-yellow in color. Multicolored crystals reflect a “fluid chemistry” during crystallization.