Arctic Canadian Diamond Company just announced the recovery of a yellow octahedron diamond weighing an impressive 71.26 carats. The rough gem is believed to be the largest fancy vivid yellow diamond ever discovered in Canada. 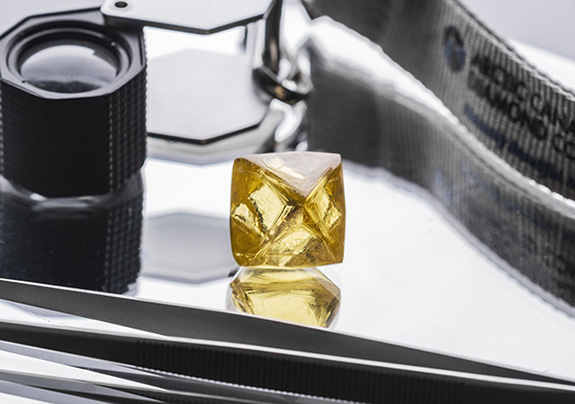 The stone was unearthed last month at the Ekati Diamond Mine in Canada’s Northwest Territories, about 200 km south of the Arctic Circle. More specifically, it can be traced to Ekati's famous Misery Pipe, which has been the source of many of the world's finest precious yellow diamonds.

“This historic fancy vivid yellow gemstone continues to showcase Canada as a major player on the world stage for diamond mining,” said Rory Moore, President and CEO of Arctic Canadian. “Canadian diamonds are some of the most sought-after globally because of responsible mining practices and environmental stewardship.”

Ultimately, a buyer will determine the shape of the finished stone, hoping to maximize its size while bringing out its optimum brilliance. It’s not unusual for half the diamond’s weight to be sacrificed during the arduous cutting and polishing process. Even if 60% of the stone's weight is lost during the transformation, the finished diamond could weigh close to 30 carats.

Ekati is Canada’s first diamond mine and has supplied premium rough diamond assortments to the global market for more than 24 years. The mine is located about 300 km northwest of Yellowknife in the Northwest Territories. Ekati, which derives its name from the Tlicho word meaning "fat lake," is Canada’s first surface and underground diamond mine.

The Ekati diamond mine officially began production in October 1998, following extensive exploration and development work dating back to 1981, according to the mining company.

Back in October of 2018, a 552-carat yellow diamond was unearthed at the Diavik mine, also near Yellowknife. While that rough stone far outweighed the one just unveiled by Arctic Canadian Diamond Company, the 204-carat primary diamond cut from the "552" carried the lower color grade of fancy intense yellow.