A 15-second commercial for Lucky Charms breakfast cereal reveals the magical story behind the new rainbow-speckled, diamond-shaped marshmallow charms that have been added to the limited-edition summertime rollout. 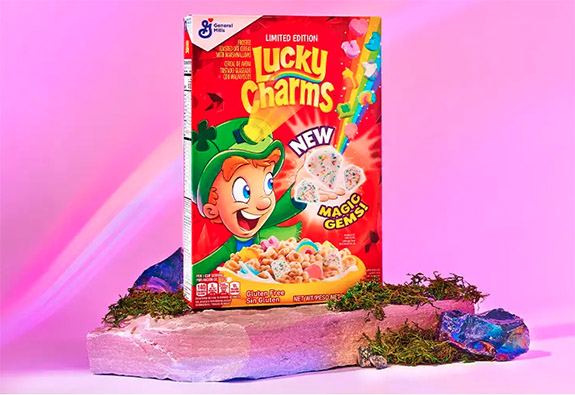 The "Magic Gems" commercial opens with two young explorers looking for Lucky the Leprechaun in a dense jungle.

"I know he's around here somewhere," answers the girl as he she peers down the void of a hollowed out tree stump.

The camera's point of view dives deep underground, where we see Lucky collecting a gleaming white Magic Gem to help him navigate a goblin's den. 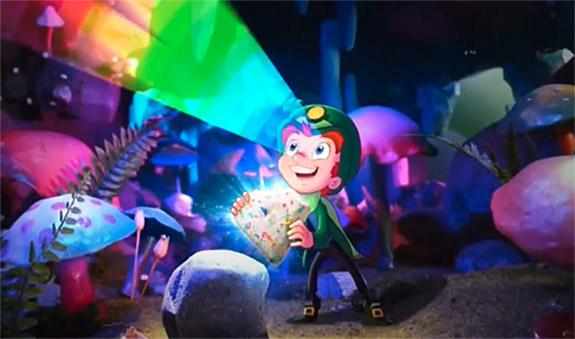 Lucky says, "Rainbow Gems, you are the spark with your rainbow sparkles. I can see in the dark."

The back of the cereal box explains the fantastical backstory, that "Magic Gems have been stowed away in the goblin's den for centuries and hold the power of rainbow vision to see in the dark, helping whoever finds them navigate their way through the darkest of places."

As generations of Lucky Charms fans already know, the cereal contains colorful marshmallow charms, each of which bestow upon Lucky their own special powers: hearts (power to bring things to life), shooting stars (power to fly), horseshoes (power to speed things up), clovers (luck, but you never know what kind of luck you’ll get), blue moons (power of invisibility), rainbows (instantaneous travel from place to place), balloons (power to make things float) and unicorns (power to bring color to the world).

Food reviewers have generally given the "Magic Gems" edition of Lucky Charms a collective thumbs up, although they agreed that the taste of the rainbow-speckled, diamond-shaped "gem" was indistinguishable from the other marshmallow charms.

It's hard to imagine that Lucky Charms is celebrating its 58th year in the General Mills lineup.

The sweet treat was a conceived by product developer John Holahan, whose prototype was a mixture of Cheerios cereal pieces mixed with chopped up fragments of his favorite candy — Circus Peanuts.

According to General Mills, Lucky Charms debuted in 1964 with oat cereal in the shapes of bells, fish, arrowheads, clovers and X’s, complemented by marshmallows in the shapes of green clovers, pink hearts, orange stars and yellow moons.

Today, the marshmallow pieces in Lucky Charms are officially called “marbits.” Of the original marbits, only the pink hearts remain.

Trivia: Lucky the Leprechaun was replaced in 1975 by a character named Waldo the Wizard. Waldo's gig didn't last long. Lucky reclaimed his spot less than a year later.