Of the largest 50 rough diamonds ever discovered, seven have come from Lesotho, a tiny, landlocked kingdom at the southern tip of Africa. Despite its diminutive size (Maryland is larger), Lesotho produces a remarkable number of large, Type II, top-quality stones. (Type II diamonds are extremely rare, colorless and chemically pure with no traces of nitrogen impurities.) The kingdom's diamond mines generate more dollars-per-carat than any other diamond-producing country. 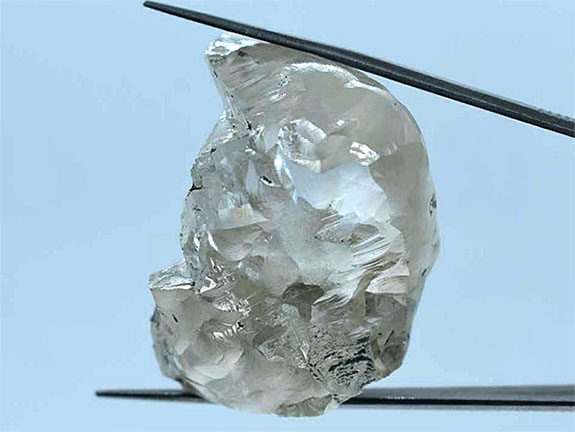 Last week, Lucapa Diamond Company unveiled a 204-carat white diamond from its Mothae mine in Lesotho. It is the eighth diamond of 100+ carats and third of 200+ carats to be recovered from the sky-high mine since commercial production began in January 2019.

The Mothae kimberlite mine is situated at an altitude of 2,900 meters (1.8 miles) above sea level in the Maluti Mountains. Lucapa has a 70% stake in the mine, with the remainder owned by the Government of the Kingdom of Lesotho.

Lesotho is also home to the prolific Letšeng Diamond Mine, which is co-owned by Gem Diamonds, Ltd., and the government of Lesotho.

The Australia-based Lucapa Diamond Company also operates the high-value Lulo mine in Angola. Lulo is best known for producing a 404-carat oblong rough diamond that was eventually cut by de Grisogono into a D-flawless, 163-carat emerald-cut stunner that became the centerpiece of an emerald and diamond necklace. That piece fetched $33.7 million at Christie’s Geneva in November of 2017.

According to diamonds.net, Lucapa will sell the 204-carat stone to the Graff-owned subsidiary, Safdico, which is contracted to buy all Mothae rough for a 2 1/2-year period. The agreement also allows Safdico to purchase up to 60% of the output of Lucapa’s Lulo mine.