Birthstone Feature: 1,298-Carat Aquamarine Was Gifted to Eleanor Roosevelt in 1936

Did you know that one of the largest and most famous aquamarines of all time — a 1,298-carat wonder — was gifted to First Lady Eleanor Roosevelt by Brazilian President Getúlio Vargas more than 85 years ago? This extraordinary example of March's official birthstone now resides in the Franklin D. Roosevelt Presidential Library and Museum in Hyde Park, NY.

FDR had just won his second term as president in November of 1936, when he and the First Lady decided to embark on a month-long “Good Neighbor” adventure to South America.

When the cruiser USS Indianapolis landed in Rio de Janeiro, the Brazilian president and his wife presented Eleanor Roosevelt with the remarkable stone from Vargas’ own collection. At the time, the bluish-green, rectangular, step-cut gem was the world’s largest cut aquamarine. It measured 9.5cm wide x 5.7cm deep x 2.9cm high (3 3/4 in x 2 1/4 in x 1 1/8 in).

Mined in the Brazilian state of Minas Gerais, the gem was cut from a rough stone that weighed 6,500 carats (2.86 pounds). The rough stone had been shipped to Amsterdam, where cutter Gustav Reitbauer successfully produced two world-class gems — the one given to the First Lady, and a second, at 865 carats, that was sold to Jagatjit Singh, the Maharaja of Kapurthala (India). 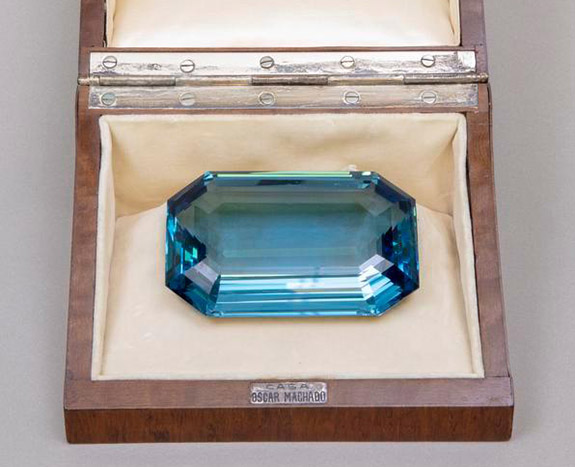 The First Lady’s gift was presented in an Art Deco wood veneer box, which was custom made by jeweler Casa Oscar Machado. Even today, the gem remains in its original presentation box, which is lined with white satin and velvet.

Like many famous gemstones, Eleanor Roosevelt’s aquamarine was the subject of intrigue and controversy. In 1947, two years after FDR’s death, syndicated columnist and radio personality Drew Pearson accused the former First Lady of trying to sell the aquamarine. Apparently, the columnist had been tipped off that she had attempted to discover the gem’s value. The controversy went away quietly after she donated the gem to the Franklin D. Roosevelt Presidential Library. 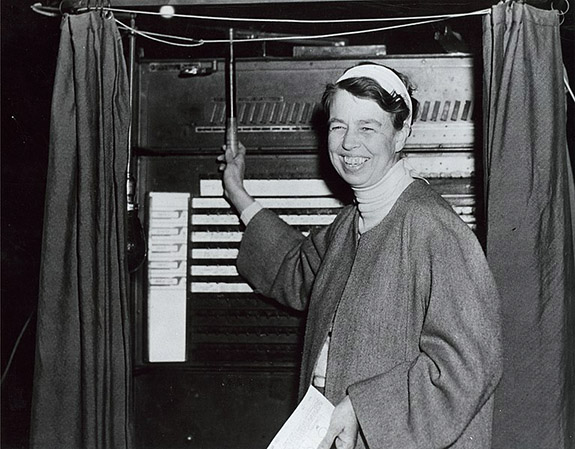 She gave the aquamarine a shout-out in her 1949 autobiography This I Remember: “I think it does interest people and perhaps does serve a good purpose by symbolizing the kindness and generosity of Brazilian feeling toward our country.”

Aquamarine is the sea-blue variety of the mineral beryl, whose family members include emerald (intense green) and morganite (pink to orange-pink). Aquamarines can range in color from light blue to pure blue to shades of greenish-blue. The variations in blue color are dependent on trace amounts of iron in the gemstone’s chemical composition.

Aquamarines are mined in many countries, including Nigeria, Madagascar, Zambia, Pakistan, Mozambique and the U.S., but most of the finest-quality gemstones still come from Brazil.