A 54-pound Gold Rush-era ingot that was swallowed by the sea in 1857 and recovered 200 miles off the coast of South Carolina in 1988 will be offered for sale at Heritage Auctions in early January. 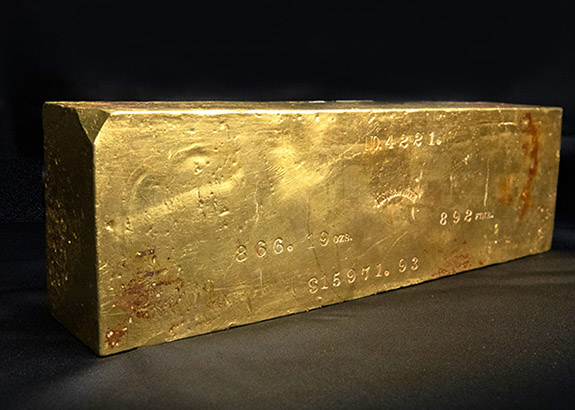 Assayed in California by Justh & Hunter, the massive gold brick met its watery demise when a hurricane sank the sidewheel steamer while it was transporting its precious cargo to Philadelphia via New York City. Onboard was 30,000 pounds of gold and 578 passengers. 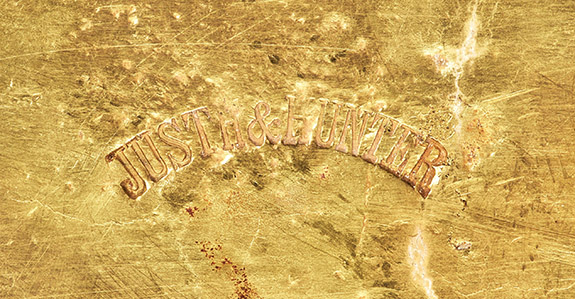 The loss of the SS Central America was reported at the time as the country's worst peacetime disaster at sea. Only 153 passengers survived and all the cargo was lost.

The 12-inch-wide ingot is in pristine condition and stamped with its weight, value, fineness of .892, serial number 4221 and maker's mark. Even though it was underwater for more than 130 years, the ingot looks brand new. This is because gold, as an element, is practically impervious to corrosion.

To put the value of the ingot into perspective, the average carpenter in New York City in 1857 earned $10.74 per week. This single ingot could have paid the weekly wages of 1,487 of these laborers.

For more than 130 years, the sunken steamer known as the Ship of Gold, rested undisturbed in the Atlantic Ocean 1 1/2 miles beneath the surface. Then, in 1988, an inventor named Tommy Thompson spearheaded a recovery operation, which involved sending down a remotely operated vehicle, the Nemo.

Thompson's associate Bob Evans told CoinWeek in 2018, "We dusted off an area where there was a huge concentration of treasure, which turned out to be the commercial shipment area or a portion of it, on the shipwreck, and we just see gold bars and coins carpeting the sea floor. That was just beyond belief… We called it the 'Garden of Gold.' It literally looked like it."

California Gold Marketing Group has owned this unique piece of American history for the past 20 years. The ingot will be offered for sale by Heritage Auctions during its January 5-10 FUN US Coins Signature® event in Orlando.