Vancouver-based artist Cliff Kearns is passionate about diamonds. In his latest series of paintings called "Immortal Diamond," the artist is inspired to interpret, bend and push the gem’s characteristics. Shifting geometric shapes and brilliantly changing facets seem to explode off the canvas in his colorful, spirited explorations of nature's most precious stone. 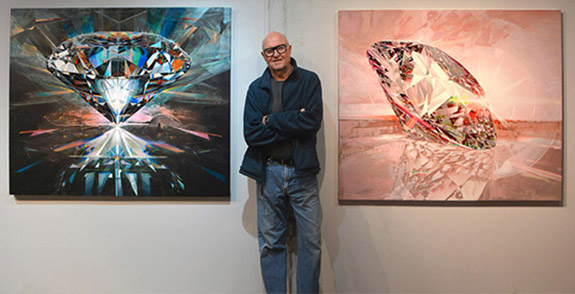 These mixed-media artworks begin as digital creations which are then rendered, embellished and finished in acrylic paint on canvas. His close-up views and use of background refractions tend to convey the precious stone's beauty, infatuation and romance. 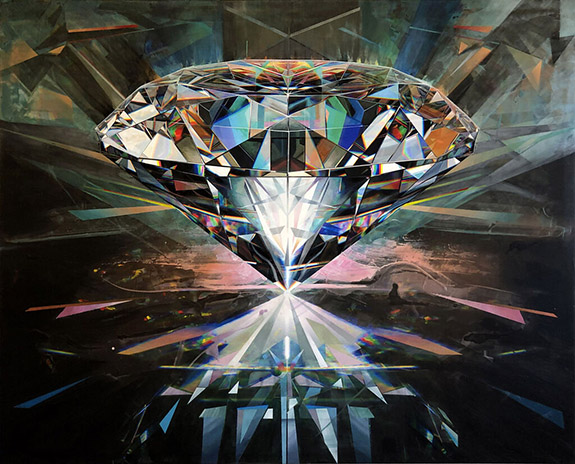 Kearns employs iridescent and metallic acrylics, and even adds some glitter into the painted shapes. This technique tends to alter the appearance of the work when viewed from different angles, making it come alive — not unlike the nature of an actual diamond. 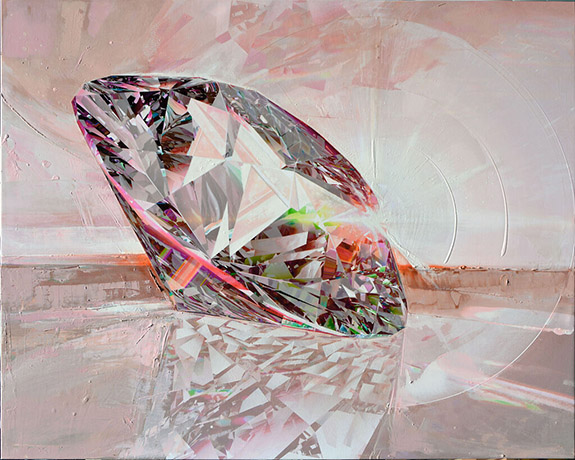 For the past two years Kearns has been working on the series, which, so far, includes 11 original paintings.

"My original references are based on just three high-resolution photos of true round diamonds, thus far," Kearns told The Jeweler Blog. "I crop, flop and manipulate those photos on the computer with filters. I play with the image on the computer until I’m excited and like what I see, and that provides the reference for my finished painted version." 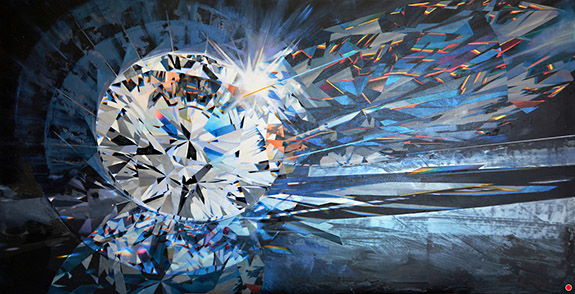 Although brilliant-cut, round diamonds are perfectly symmetrical and generally display 57 facets, Kearns's work is not constrained by a diamond's true angles and proportions.

When the different layers of his digital files are superimposed and merged, they are bound to distort the original trueness of the gem, he said.

The resulting work is based more on a feeling than accuracy.

"The painting process can alter the structure even more, so the finished painting would not be true to the diamond's accurate proportions," he said. "Despite that, I want the finished result to be appealing and to be perceived as a beautiful diamond." 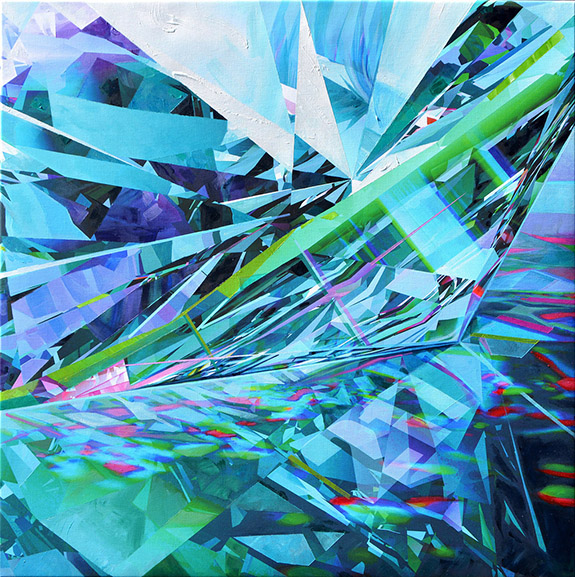 His larger paintings usually take a couple of months to complete. The smaller ones take about a month.

Kearns' current series was inspired by Father Richard Rohr's book, Immortal Diamond, and the artist's own contemplation on life. Rohr likens the diamond to our true self buried deep within us, molded under the intense pressure of our lives. 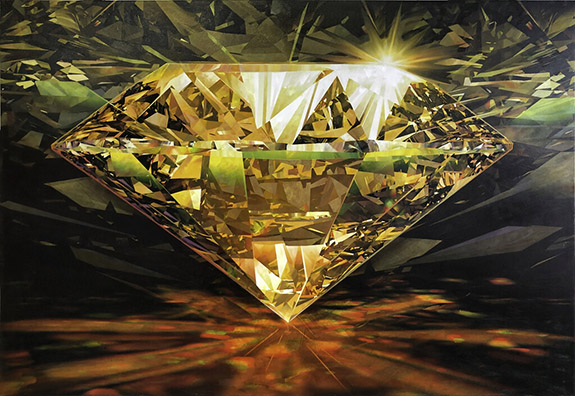 "The Diamond seems to have a lot of inherent qualities and symbolism which can be presented to make reflective statements and elicit positive response," he said.

So far, Kearns has only used round diamonds for reference.

Ten of Kearns' 11 original "Immortal Diamond" paintings are on display in the artist's Parker Street Studio in Vancouver. One of the originals was sold and five more pieces are in various stages of completion. The price of his work ranges from CAD$1,200 to CAD$8,200.

"I’m only beginning to learn about diamonds. As I learn more, there [will be] much more to explore in paintings," he said. "As an artist, success depends on image identity and "The Diamond" is a good image to be identified with. So, I see myself doing quite a few more diamond paintings."

The artist also offers limited-edition prints of the original works, in proportions about two-thirds the size of the original. They are printed on an ultra chrome archival paper, which is mounted on a thin durabond and surfaced in acrylic.

"The result is very sleek and contemporary," Kearns said.

You can learn more about the artist and see more examples from the "Immortal Diamond" series at the artist's website.