A colorful array of 355 gemstones imitate embroidered fabric in a Fabergé brooch that will be auctioned by Christie's London on November 29. The auction house set the presale high estimate at $122,000. 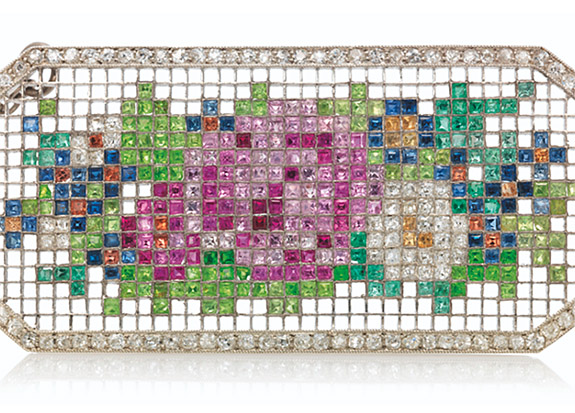 Christie's noted that the "incredibly delicate and rare brooch is one of the most imaginative and recognizable designs produced by Fabergé."

Peter Carl Fabergé and his company famously designeda series of 50 bejeweled eggs for the Russian Imperial Family from 1885 to 1917. Alexander III and Nicholas II commissioned many of the “Imperial” eggs as Easter gifts for their wives and mothers. The meticulously crafted objets d’art were produced up until the Russian Revolution, when the Fabergé family fled Russia. 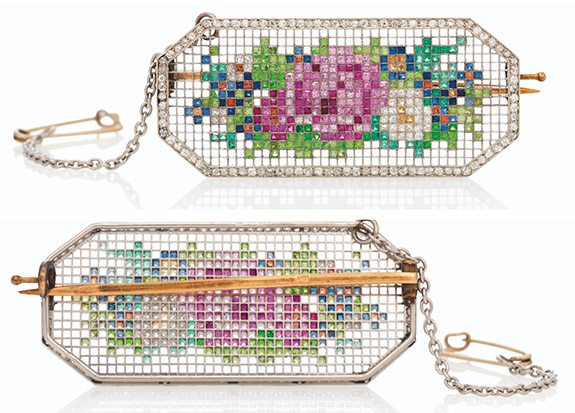 Designed in St. Petersburg circa 1913, the piece seen above measures only 4.3 cm across (about 1 5/8 inches). Despite its small size, the platinum trellis-work panel contains 640 holes — 40 across and 16 down. More than half of them are set with diamonds, rubies, topaz, sapphires, demantoids, garnets and emeralds in a Russian-influenced floral motif. The perimeter of the brooch is framed by diamonds, but many of the holes just inside the perimeter are left empty to create a sense of dimension and negative space.

Fabergé artisans cut each of the square holes by hand and each gemstone had to be calibré-cut in such a way that it would perfectly fit into its designated space of approximately 1mm x 1mm.

According to Christie's, the same technique was employed for the Imperial Mosaic Egg presented by Nicholas II to his wife Alexandra Feodorovna in 1914. That egg is now part of the Royal Collection.

The Mosaic Egg was designed by Alma Pihl (1888-1976), who had deep ties with the Fabergé organization. Her father, Oscar Pihl, was head of Fabergé’s jewelry workshop in Moscow and her grandfather, August Holmström, was a Fabergé workmaster. According to jewelry-industry lore, Alma Pihl was inspired to produce the floral embroidery motif after watching her mother-in-law do needlework by the fireside.

Most recently, the piece was owned by Harry Woolf, a London-based businessman, who began to collect Fabergé items in the early 1970s. Christie's November 29 auction is titled "A Selection of Fabergé Masterpieces from the Harry Woolf Collection."