The award-winning "Star of Katandru" — a 16.21-carat Sri Lankan star ruby — has been part of the Smithsonian's National Gem Collection since 2005. This unique example of July's official birthstone displays a perfect star with six clean, symmetrical, unbroken legs. 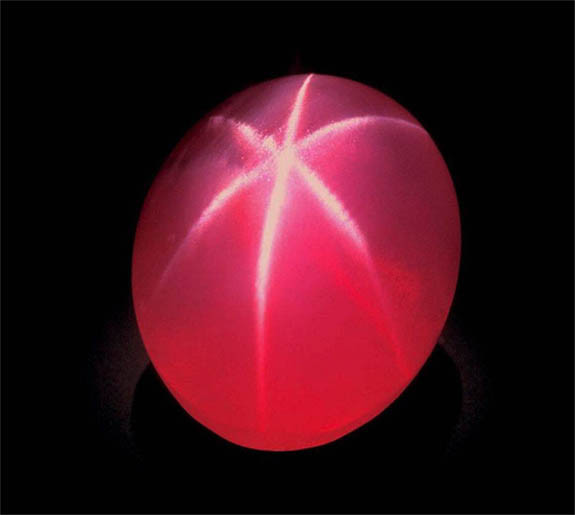 The rare gem was gifted to the Smithsonian by international gemstone merchant Jeffrey B. Bilgore, who told JCK magazine in June of 2005 of his vivid memories of visiting the Smithsonian in Washington, DC, and falling in love with the phenomenal stones.

Bilgore had learned that Smithsonian gem curator Jeffrey Post was looking for a fine star ruby, so when a series of fortunate circumstances allowed him to buy the Star of Katandru, he had no doubt about where its final destination should be.

"If I sell it, I never get to see it again," Bilgore told JCK. "This way everyone gets to see it."

The gem's prominent six-rayed asterism is caused by titanium trapped in the corundum while the crystal is forming. As the crystal cools, the titanium orients itself as needle-like structures in three directions. The smooth, rounded cabochon cut allows the light to reflect off the titanium and give the appearance of a six-legged star.

The name Katandru sounds like it may have exotic origins, but is it actually a mashup of the names of Bilgore's children — Katherine and Andrew. The donation was made in memory of I. G. Heyman. Bilgore had worked for luxury dealer Oscar Heyman & Brothers for 16 years, before establishing his own business.

Ruby is a variety of the mineral corundum (aluminium oxide). Gemstone-quality corundum in all shades of red are generally called rubies. Corundum in other colors are called sapphires.

The word “ruby” comes from “ruber,” Latin for red. Rubies gets their color from the element chromium and boast a hardness of 9.0 on the Mohs scale. Only diamonds are rated higher at 10.0.

Legend tells us that rubies were revered as a mystical gem representing love, health and wisdom. It was a long-held belief that wearing a ruby brought good fortune to its owner. The value of a ruby increases based on its color, cut, clarity and carat weight.

While Myanmar (Burma) has earned the reputation of producing the finest rubies, the coveted red gems have also been mined in Sri Lanka, Pakistan, Afghanistan, Thailand, Cambodia and Vietnam.

Credit: Image courtesy of the Smithsonian.