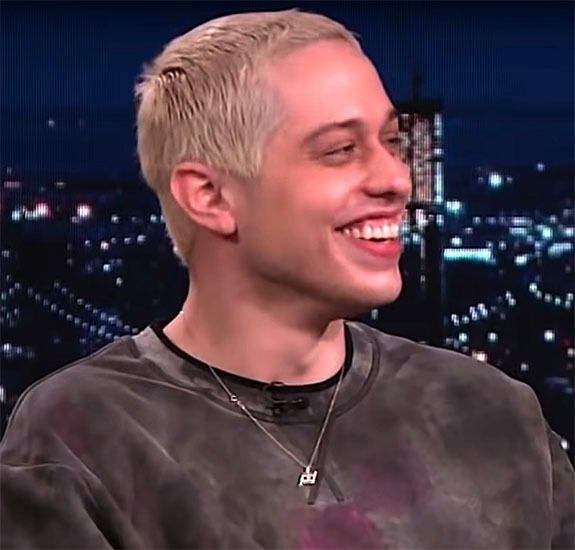 Eagle-eyed fans noticed that the "PD" initial pendant Davidson wore during his appearance April 6 on The Tonight Show Starring Jimmy Fallon was exactly the same as the one worn by Dynevor during her March 8 International Women’s Day cameo on Brie Larson's YouTube channel.

Rumors had been circulating for months that Davidson and Dynevor were managing a long-distance relationship while he's in New York shooting SNL and she's in London filming the second season of the wildly popular Bridgerton series for Netflix. They had been spotted holding hands in England during recent weeks.

Certainly Davidson, 27, and Dynevor, 25, have the exact same initials, but what are the odds that they would have randomly purchased the same type of jewelry?

It's more likely that they bought matching necklaces and wear them as a sweet and symbolic connection while they apart. Buzzfeed speculated that there is a single "PD" necklace that Davidson borrowed from Dynevor for his Tonight Show appearance.

Nevertheless, the publications are in agreement the couple intentionally used the "PD" necklace to drop a subtle hint to their fans about their romance.

“Pete and Phoebe are still going strong despite not being able to physically spend time together,” a source told US Weekly. "They keep in touch over text and FaceTime. Right now, they’re just focused on work… They’re not looking to rush things.”