Radiating with 232 diamonds and 53 sapphires, the Los Angeles Dodgers' 2020 World Series ring is a fitting tribute to a franchise celebrating its seventh world title. Coaches and players were presented with their rings on the field at Dodger Stadium prior to the team's home opener on Friday. The total weight of all the gemstones is exactly 11 carats. 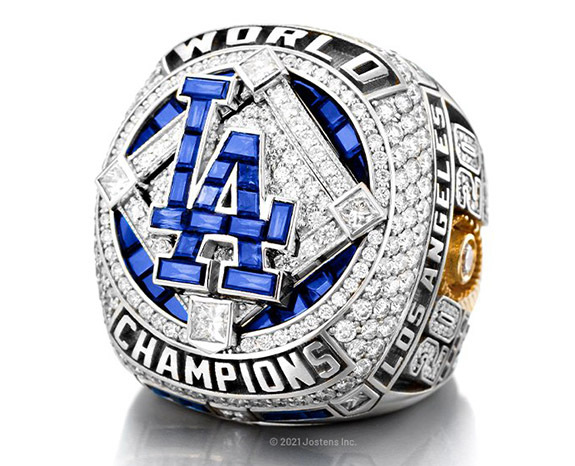 Steeped in intricate storytelling and artful details, the 14-karat white and yellow gold rings tell the story of the team's march to the 2020 championship, while also paying homage to the storied franchise that began calling Los Angeles its home in 1958.

What instantly stands out in the championship ring are the 17 custom-cut Dodger blue sapphires that make up the "LA" symbol. That symbol is layered atop a baseball "diamond" illustrated with pavé-set gems and punctuated at the bases with princess-cut diamonds. In total, the interior of the baseball diamond is set with 29 diamonds symbolizing the number of Dodgers home runs hit in the Arlington, Texas, Postseason Bubble.

Layered below the LA logo and baseball diamond is a ground of 16 intricately set genuine custom-cut sapphires. The blue gems are encircled by a halo of 44 diamonds. Above and below the halo are the words WORLD and CHAMPIONS set in raised white-gold lettering on a black ground.

Enhancing the edges of the ring face are six princess-cut diamonds set in stylized pennants, which honor the Dodgers' previous six World Series titles. Cascading down the sides of the ring top are 96 diamonds.

Combined on both edges of the ring are 12 princess-cut sapphires representing the 12 home runs hit by the Dodgers in the 2020 World Series, a feat that contributed heavily to the team's 4-2 series victory over the Tampa Bay Rays.

The right side of the ring features the Dodgers home town, spelled out in raised white gold lettering. Below the words Los Angeles is the year 2020 set with 36 round diamonds. Splitting the 20s in the year 2020 is the coveted Commissioner's Trophy illustrated in contrasting yellow gold. The trophy is punctuated by a single diamond.

On either side of the trophy are four round sapphires. The eight sapphires and the text NL WEST below are symbolic of the eight straight NL West Division titles held by the Dodgers. Los Angeles palm trees are the finishing detail on the right side of the ring.

The LA logo crafted in blue enamel is at the center of the inside of the ring. On either side of the "LA" symbol are the logos of the teams the Dodgers faced in the run up to the World Series. Also shown are the series results.

The rings were presented to the players and coaches in an elaborate ring box that featured a rotating platform, interior light and an LCD screen that automatically plays a four-minute highlight film each time the box is opened. Jostens called it the most elaborate ring box ever created by the company.

“For 32 years Los Angeles waited for this moment, this team and this ring – and all that it represents. Jostens did a spectacular job designing these rings, which represent the sacrifice, determination and fortitude demonstrated by our players, coaches and entire organization to win a championship while overcoming unprecedented challenges,” said Stan Kasten, Dodgers President and CEO. “We are so proud of this team and thrilled to have presented them with their rings today in front of the best fans in baseball.”