Stellar examples of December's official birthstone are highlighted on the next stop of our virtual tour of the Smithsonian’s National Gem Collection at the National Museum of Natural History in Washington, DC. The Zuni tribe of western New Mexico are recognized worldwide for their superbly crafted turquoise and silver jewelry — an attribute celebrated by a special exhibit called "Colored by Copper." 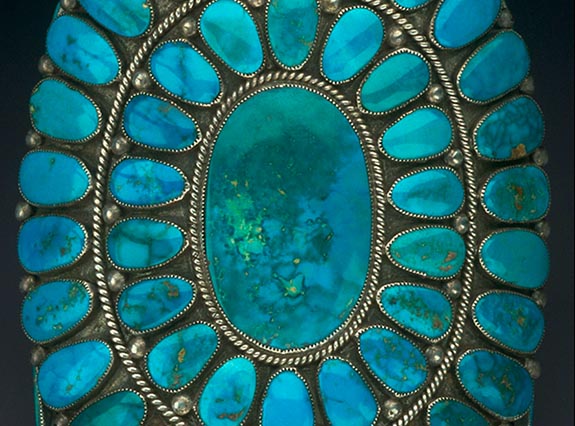 The bracelet seen above was designed by the renowned Zuni silversmith Warren Ondelacy and donated to the Smithsonian in 1978 by Mr. and Mrs. M. Silverman. A piece of similar design and origin occupies the most prominent position in a wall display showcasing gems that get their distinctive blue coloration from the presence of copper in their chemical makeup.

The Zuni people have inhabited the Zuni River valley in western New Mexico for more than 3,000 years. Interestingly, they associate blue turquoise with men and green turquoise with women.

Normally, Smithsonian visitors would be able to see the impressive turquoise exhibit in person, but while most of the national museums remain temporarily closed in an effort to contain the spread of COVID-19, we offer this alternative — a virtual tour of the Janet Annenberg Hooker Hall of Geology, Gems, and Minerals.

Here’s how to navigate to the exhibit called “Colored by Copper.”

— Next, click the double-right-arrow two times to navigate to the gallery called “Geology, Gems & Minerals: Minerals 1.”

When you arrive, you will see three freestanding glass cases.

– Click and drag the screen 180 degrees to the left so you can see the wall cases directly behind you.

The case to the left contains a selection of turquoise specimens and jewelry. Occupying the tallest platform in the center of the exhibit is a Zuni turquoise bracelet. Touch the Plus Sign to zoom in. 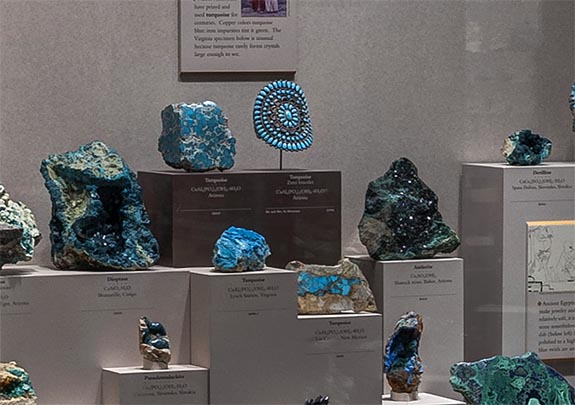 (You may touch the “X” to remove the map. This will give you a better view of the jewelry. You may restore the map by clicking the “Second” floor navigation on the top-right of the screen.)

This display explains how turquoise is probably one of the oldest gem materials known to man. It was mined by the Egyptians more than 6,000 years ago, prized for its sky blue color by the Aztecs and Incas, and later by the Native Americans. The golden funeral mask of Egyptian pharaoh Tutankhamun is famously inlaid with turquoise.

According to the Smithsonian, turquoise gets its name from the Old French phrase “pierre Turquoise” or “stone of Turkey,” in reference to the considerable Persian turquoise that was sold in Turkish markets. Copper impurities give turquoise its delightful sky blue color, while iron impurities will tint it green.

Turquoise is one of three official birthstones for the month of December. The others are tanzanite and zircon.

The primary sources of turquoise are Mexico, Israel, Iran, Afghanistan, China and the American Southwest.