Welcome to 'Engagement Season,' the Most Romantic Time of the Year

If the trending continues, Holiday Season 2020 promises to be the most romantic ever. 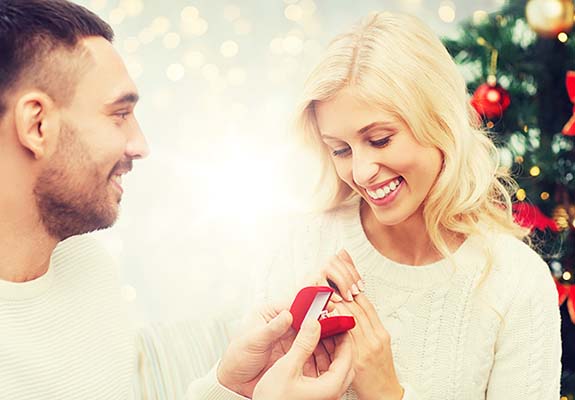 Welcome to “engagement season,” that special time of the year when more than 40% of all marriage proposals take place. It officially starts next week on Thanksgiving Day and stretches through Valentine's Day.

WeddingWire’s 2020 Newlywed Report reveals a significant spike in the portion of proposals taking place during the month of December. A surprising 19% of all engagements are happening during that festive month, and the number represents a significant rise of three percentage points since 2017. December proposals outnumber any other month by a margin of better than 2 to 1.

According to WeddingWire, the hottest proposal days take place in December. Christmas Day is the most popular day of the year to pop the question, followed by Christmas Eve, New Year’s Day, the Sunday before Christmas Eve and Valentine’s Day.

Suitors likely choose December to pop the question because they love the spirit of the holiday season. And, certainly, there’s no better time to propose than when all the family is in town to celebrate with the newly engaged couple.

The 2020 Newlywed Report, which chronicled the opinions and experiences of 27,250 individuals who were married during the full year of 2019, also revealed that when it comes to finding a one-of-a-kind engagement ring, 45% of proposers began researching/looking for rings more than five months ahead of the proposal.

Couples told WeddingWire that they considered style/setting to be the most important aspect of an engagement ring, and nearly 80% admitted to dropping hints about their ring preferences to their significant others. Seven out of 10 ring recipients had some involvement in selecting and/or purchasing the ring itself.

On average, proposers visited three retailers and looked at 15 rings before making a decision.

Nearly nine in 10 (89%) of suitors proposed with ring in hand and 84% popped the question on bended knee. The average age of engaged couples is 32 and the average engagement length is 15 months.