Is It Possible to Set a Diamond Ablaze? These Scientists Deliver the Answer

Diamond sits alone atop the Mohs scale as the hardest naturally occurring material known to man. It is harder than a ruby, sapphire or emerald and has the ability to slice through steel like a hot knife through butter. The only substance that can scratch a diamond is another diamond. 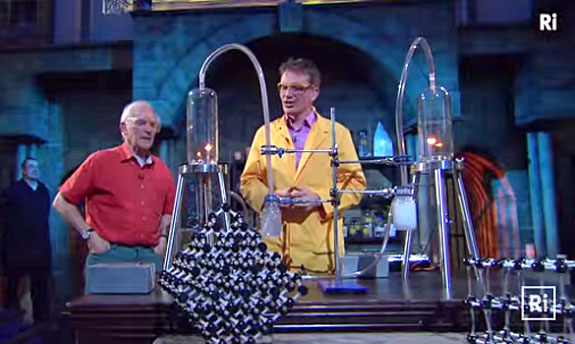 Under normal circumstances, diamonds truly are forever. But in the labs of the British Royal Institution, the famous De Beers ad slogan was put to the test.

Because a diamond is made from pure carbon, scientists have theorized since the 1700s that it should burn like other carbon materials, such as graphite or coal.

And, indeed, during the early 1770s, French chemist Antoine Lavoisier used two powerful lenses to magnify the sun’s rays directly onto a diamond. The diamond slowly disappeared and carbon dioxide gas accumulated, proving that the diamond was made from carbon.

In the 2013 video, below, British scientist and author Peter Wothers enlisted the help of Nobel prize-winning chemist Sir Harry Kroto to demonstrate what it takes to get a diamond to burn. (Kroto passed away in 2016 at the age of 76.)

Wothers added a bit of drama and comic relief by using Kroto’s wife’s engagement diamond for the experiment. The viewer can see Kroto getting increasingly more uncomfortable as it becomes very clear that his wife’s diamond — under just the right conditions — has ignited.

In pure oxygen, diamonds can burn at 1320 degrees F. In normal conditions, the ignition occurs at about 1520 degrees F.

Wothers’ experiment was conducted in a chamber of pure oxygen. The resulting gases were collected in a tube leading to a beaker of limewater. The experiment anticipated that if the burning material contained carbon, the smoke would contain carbon dioxide. When the carbon dioxide was mixed into the limewater, it turned the mixture a milky white color — basically delivering calcium carbonate, an antacid used to calm a sour stomach.

In his preliminary experiment, Wothers easily ignited a bit of graphite using a torch. Then he upped the ante by doing the exact same experiment using the Kroto engagement diamond. 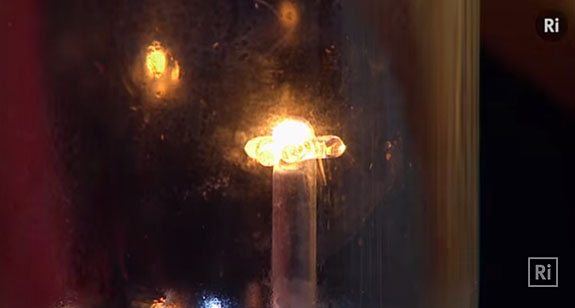 Surprisingly, that lit up, too. The diamond burned as a golden ember without producing any flames. At that point, Kroto half-jokingly commented that he hoped Wothers could afford to pay for a replacement diamond. 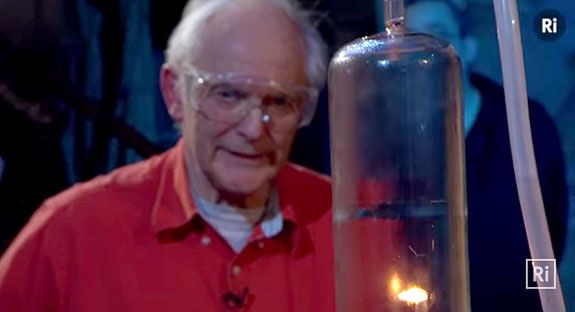 As you might have figured out by now, Wothers had cleverly swapped the Krotos’ engagement diamond with a much lower quality specimen before the experiment began.

If you’re worried about how a diamond is protected when a ring needs to be retipped, for example, be assured that jewelers go to great lengths to make sure that the extreme heat of the torch does not affect the gemstone. Some jewelers use boric acid to protect the stone while others depend on the pinpoint accuracy of a laser welder to keep the diamond out of harm’s way.

Kroto won his Nobel Prize in Chemistry in 1996 for his work in discovering fullerenes, a pure carbon molecule that takes a shape similar to a soccer ball. Research has suggested many uses for fullerenes, including medical applications, superconductors, fiber-optics systems and nanotechnology.