As of this month, Oscar Mayer's 27-foot-long Wienermobiles have been making appearances at marriage proposals from coast to coast. There are currently six hot-dog-shaped promotional vehicles criss-crossing the continent, and to book one, all you have to do is visit the company's website, fill out a request form, and hope for some good luck. 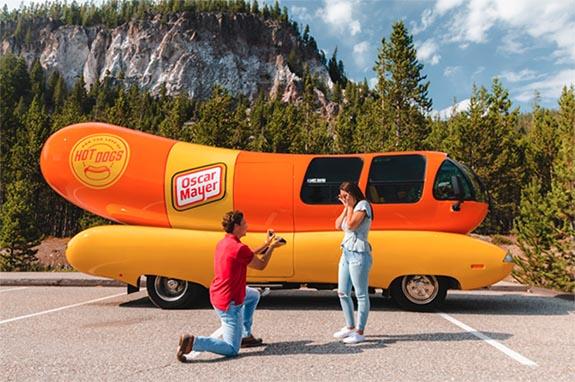 Oscar Mayer charges no fee for a Wienermobile appearance, but spots are based on availability. The company recommends that requests be made from three to 12 months ahead of the big day. The company will notify winners one week prior to the requested date.

Wienermobile proposals became a thing at Oscar Mayer after Zach Chatham, an official Wienermobile driver, revealed his plans to pop the question in front of the vehicle at Yellowstone National Park. Wienermobile drivers are called "hotdoggers," and this hotdogger's proposal idea caught the attention of Nick Guerten, marketing director for Oscar Mayer.

“When Zach told us about his plans to propose with the Wienermobile at Yellowstone, we knew it would be a one-of-a-kind experience they would never forget,” Guerten told foodandwine.com. “We wanted to extend this to our fans so everyone can have the opportunity of a 27-foot hot dog on wheels present during such an important life moment.”

In a clever pun-filled statement, the company wrote, “You can now relish your upcoming special day with the Oscar Mayer Wienermobile. Summer weddings may have been a no-go, but proposal season is coming up FAST. So, Oscar Mayer is making the iconic Wienermobile available to anyone who’s ready to mustard up the courage to pop the question to their significant other.”

Oscar Mayer devotes a large section of its website to the Wienermobile. There, hot dog aficionados will learn that the first Wienermobile was created in 1936 by Carl Mayer, that the 1952 version of the Wienbermobile has a permanent home at the Henry Ford Museum in Dearborn, MI, and that the 1969 Wienmobile featured Ford Thunderbird taillights, a Chevy motorhome frame and averaged 187 smiles per gallon. Fans can also track the whereabouts of the six Wienermobiles and fill out an appearance request.

When filling out the form, be sure to state how the Wienermobile will be incorporated into your proposal plan.