A young Long Island man got the best birthday gift he could have ever asked for when a thumbprint locket containing his brother's ashes was returned to him by a Good Samaritan with a metal detector. 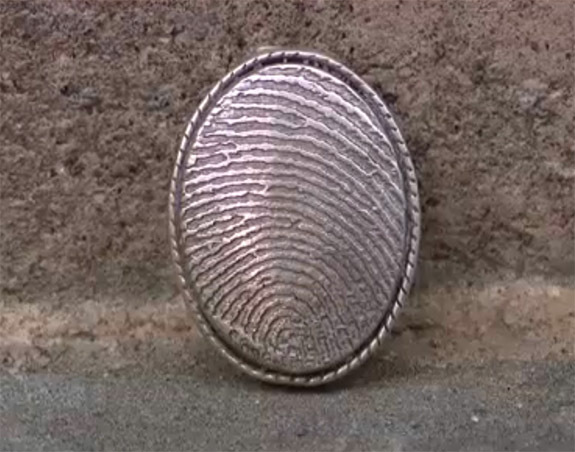 The father of four said he's had a metal detector for a long time. He's found gold items and silver items, but this recent discovery was the most unusual.

"I was sweeping the beach for about two hours and I was just about to quit and I got a really nice hit," he said. "It was 8 or 10 inches down. Right where the water meets the sand. It popped out, this thumbprint. It looked really strange to me."

The oval locket measured 1 1/2 inches tall and was inscribed with this message: "Joseph I will carry you with me until I see you again."

McAleese thought the inscription might be a prayer, but his wife, Aurelia, correctly identified it as a deeply personal sentiment. The locket was a cremation pendant.

Aurelia told her husband, "We have to find who owns this."

McAleese and his wife posted pics of the thumbprint pendant to Facebook, where is was quickly shared by more than 1,000 users.

Within a few hours, the message had made its was to Hershey Park, Pa., where Dylan Miller was celebrating his birthday with his family. 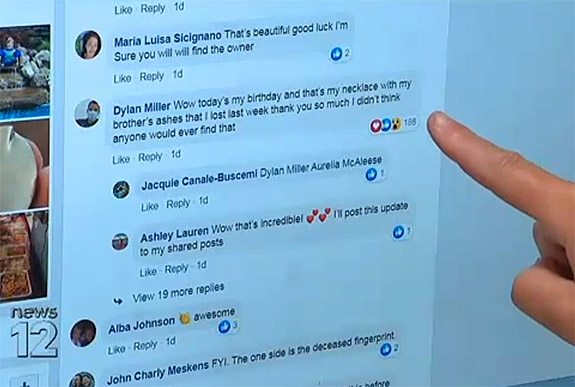 Miller posted his response: "Wow today's my birthday and that's my necklace with my brother's ashes that I lost last week -- thank you so much I didn't think anyone would ever find that."

Dylan's old brother and role model, Joseph, had passed away two years ago. The younger Miller lost the pendant while tossing a football around at the beach.

"For three hours I was basically crawling on the sand, moving my hands around trying to find it," Miller told News12.

With Miller still in Hershey, Pa., a News12 reporter was able set up a video conference to connect the young man with the husband-and-wife team responsible for finding the cherished pendant and locating him on social media.

"Thank you so much. I can't put into words how grateful I am that you found it," Miller said.

"I can't put into words how happy I am that you're going to get your brother back. That's awesome," Danny McAleese responded.

"Thanks. I couldn't have asked for a better birthday gift," the young man said.