In a move that promises to fundamentally change the way diamonds are graded for clarity, the GIA (Gemological Institute of America) has joined forces with tech giant IBM to add artificial intelligence (AI) to the process. 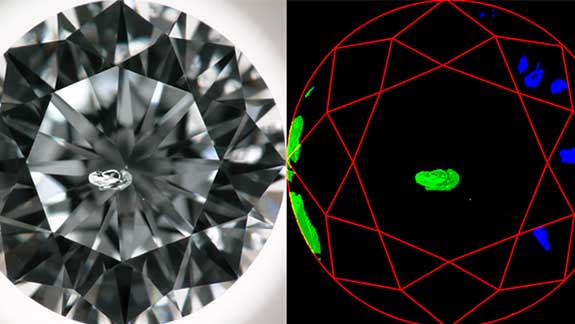 GIA, the world’s leading independent diamond identification and grading authority, and IBM Research, one of the world’s largest and most influential corporate research labs, are developing an advanced AI system built on the standards of GIA’s universally recognized International Diamond Grading System™. The artificial intelligence is fueled by data from tens of millions of diamonds examined by GIA’s expert diamond graders in the Institute’s state-of-the-art grading laboratories around the world.

The example, above, shows how an image captured using GIA-developed hardware trains IBM Research’s artificial intelligence software to recognize inclusions and reflections. In the computer rendering, the AI system has correctly identified the clarity characteristics, enabling the AI system to assign a clarity grade.

“Adding AI to our grading methodology reflects GIA’s commitment to protecting consumers in new ways,” said Pritesh Patel, GIA’s senior vice president and chief operating officer, who leads the Institute’s digital transformation effort. “We are proud to be the first to collaborate with IBM to bring this innovative approach to the gem and jewelry industry, especially as we prepare to adapt to the accelerated changes we know are coming. This is just the beginning.”

“This newest application of IBM Research’s AI technology for the diamond industry combines GIA’s deep gemological knowledge and data with IBM’s leadership in AI innovation,” said Donna Dillenberger, IBM Fellow, Enterprise Solutions at IBM Research. “This system has the ability to accurately and consistently evaluate the overall effect of diamond clarity features like never before.”

Plans are in development to expand the collaboration between GIA and IBM for future projects combining gemological evaluation and AI.