Gainesville resident Joan Sheffield says that as soon as Georgia Gov. Brian Kemp lifts the state's shelter-in-place order, she will be hosting a luncheon for a sanitation crew that helped find her three-stone diamond wedding ring at the Hall County Landfill. 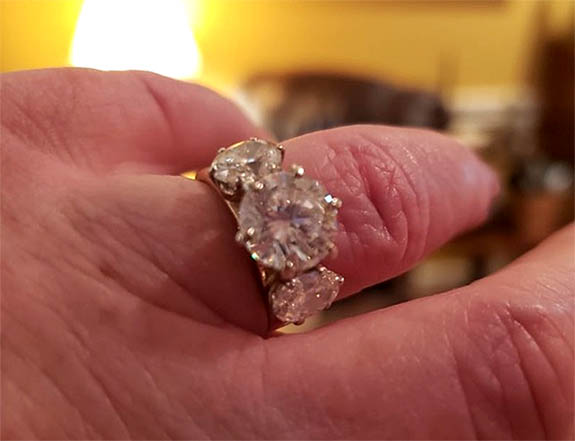 Sheffield had worn the ring on her left hand for the past 34 years, but accidentally threw it away. The precious keepsake ended up in a giant pile of trash at a landfill facility that processes 339 tons of solid waste every day.

Sheffield told AJC.com that she had been preparing a meatloaf when she took off the ring, wrapped it in a paper towel and placed it in her pocket. The 67-year-old remembered being “in a fog” that weekend because her mom had just passed away and Sheffield was tasked with cleaning out her mom’s apartment and packing up her belongings.

At the end of the day, she noticed that her pockets were filled with old receipts and paper scraps that had to be discarded. And, yes, among those worthless items was her precious ring neatly wrapped in a paper towel.

The ring was irreplaceable because it included her engagement diamond framed by two smaller diamonds that had been gifted to her by her father.

Sheffield didn’t realize her ring was gone until the next morning. By that time, the trash collectors had already come and gone.

“I heard the trash men come and didn’t think anything of it,” she told AJC.com. “As soon as I got out of the shower, I looked down at my hand and realized I didn’t have it.”

It was 8:30 a.m on a Monday when Dan Owen, the city’s superintendent of solid waste and recycling, answered an urgent call from Sheffield. The superintendent was able to intercept the truck that had serviced Sheffield’s neighborhood and ordered its crew to dump the load on a large concrete slab at the landfill facility.

Sheffield and her husband, Tommy, were already at the landfill when the truck arrived.

Owen told AJC.com that he’s received many calls from panicked residents over the years. In most cases, they call too late and the valuable item has already been buried at the bottom of the landfill. Fortunately, Sheffield called just in time.

For about 30 minutes, the couple — assisted by the sanitation crew — rummaged through countless trash bags. Then something caught Sheffield's eye — a distinctive green twist tie that her husband used to close up the trash bag the night before.

“Sure enough, there were four or five smaller bags in there and the third one was the charm,” she told Atlanta’s NBC affiliate 11Alive. “I found it.”

Sheffield described the sanitation crew as “so nice” and “so thoughtful.” She’s looking forward to taking them to lunch as soon as the state’s shelter in place order is rescinded.

“It’s a crazy time with all that’s happening right now in the world,” Johnnie Vickers, Hall County’s solid waste director told AJC.com. “And I’m just glad we were able to help make at least one person’s day a little better. It’s not a glamorous job, but these are the kind of moments that make it all worth it.”