A Philadelphia couple recently took a much-needed break from quarantine to visit one of their favorite places — the top of the Rocky Steps at the entrance of the Philadelphia Museum of Art. Emily Weiss was shocked when her boyfriend, Elly Nemtsov, popped the question in the exact spot where Sylvester Stallone's beloved character raised his arms in triumph in the 1976 blockbuster, Rocky. 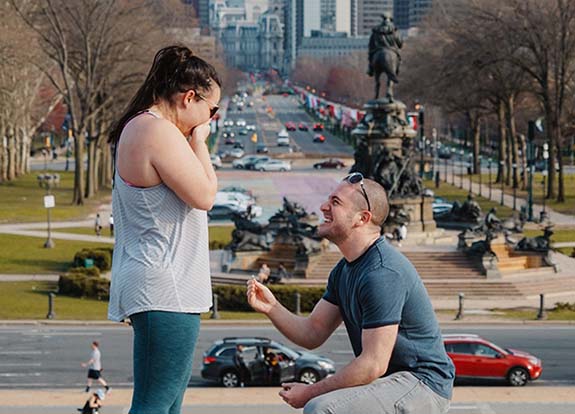 In the iconic scene, Rocky — a local club fighter who has been given a shot at the title — completes an intense training session by running up the 72 stone steps. With the "Gonna Fly Now" theme building to a crescendo, Rocky reaches the top and turns to take in a breathtaking bird's-eye view of his beloved city. Rocky's climb has become a metaphor for how Philadelphians always rise to the challenge and have the power to overcome any obstacle. 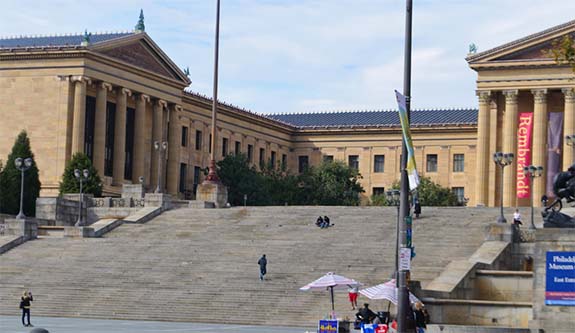 Stallone told The Philadelphia Inquirer that the theme of the movie wasn't about fighting or muscles.

"It's about love. It's about passion," he said. "It's about having something inside that you know must be filled."

Which brings us back to Weiss and Nemtsov.

According to Insider.com, Nemtsov had been planning to propose since the beginning of March, but with the city under lockdown due to the coronavirus, regular proposal venues, such as restaurants or parks, were suddenly off the board.

Officially, Philadelphia is allowing certain outdoor activities, such as walking, running or cycling, so the couple strolled to a place they've loved to visit — the tall steps leading to the Philadelphia Museum of Art.

From the top of the steps, Nemtsov called his sister and two-year-old niece. On FaceTime, the young girl showed Weiss an art project she'd been working on. On a large piece of colored paper was the phrase, "Emily, will you be my aunt?"

At first, Weiss didn't get the hint, but when she looked back at her boyfriend, he was on one knee with a diamond ring in hand. Nemtsov's sister, niece and both couple's parents all watched the proposal via FaceTime.

"I didn't think we would be going out during this, let alone a huge milestone, so I was pleasantly surprised," Weiss told Insider.com. "It definitely gives us something to look forward to and talk about while nothing else is going on."

"I think it was great timing," Weiss continued, "because we just get to be with each other and we have time on our side. It gives us something to be happy about during an otherwise depressing time."

The couple is looking to tie the knot in October 2021. 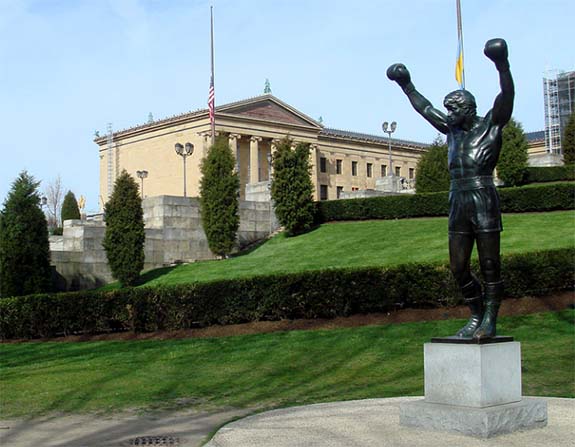 Visitors to the Philadelphia Museum of Art can see a larger-than-life statue of Rocky at the bottom of the famous steps. The 8-foot, 2,000-pound bronze statue had been commissioned by Stallone in 1980 to be used in the movie, Rocky III, and has been a favorite photo op at the museum since 2006.