Utah resident Laura Forsling is one of the few people on the planet who can say that her marriage proposal was delivered by an African raven named Joe.

Forsling was enjoying the bird show at the Hogle Zoo in Salt Lake City last week when the master of ceremonies invited her to participate in a demonstration. She had just learned that the raven is one of the most intelligent avian species and was delighted when, on command, a raven swooped onto her outstretched hand, snatched a $5 bill and delivered it back to its trainer.

The host asked her if she wanted her $5 back, but Forsling said the zoo could keep it as a donation.

But, then, the host told the young woman that he had something special for her. Little did she know that her boyfriend had schemed with the zoo's staff to surprise his girlfriend with a very special — and totally unique — marriage proposal.

"Then stand up for me and hold your hand straight out to the side," he directed. 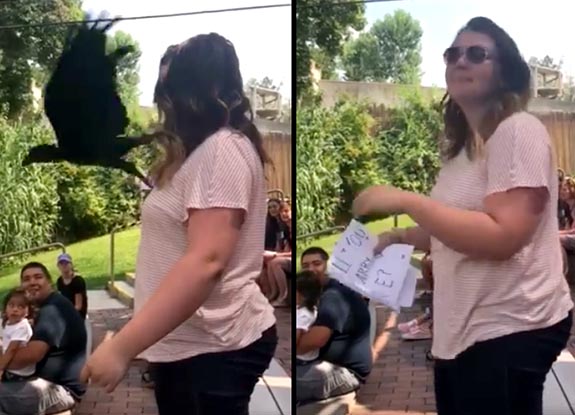 In an instant, Joe The Raven flew back to Forsling with an envelope that included a message from her boyfriend, Army Private 1st Class Dallin Bush, who was hiding out of view.

The hand-written message stated, "WILL YOU MARRY ME?" in bold capital letters.

Wearing his Army fatigues, Bush marched to where his girlfriend just encountered the raven, got down on one knee, presented her with a diamond ring and asked Forsling to marry him.

The stunned girlfriend said, "Yes," and the crowd of onlookers screamed their approval.

Bush placed the ring on his fiancée's finger and the couple embraced.

A few days later, Forsling, who is a ski instructor and the mom of two-year-old Emmett, documented the awesome event on her Facebook page. 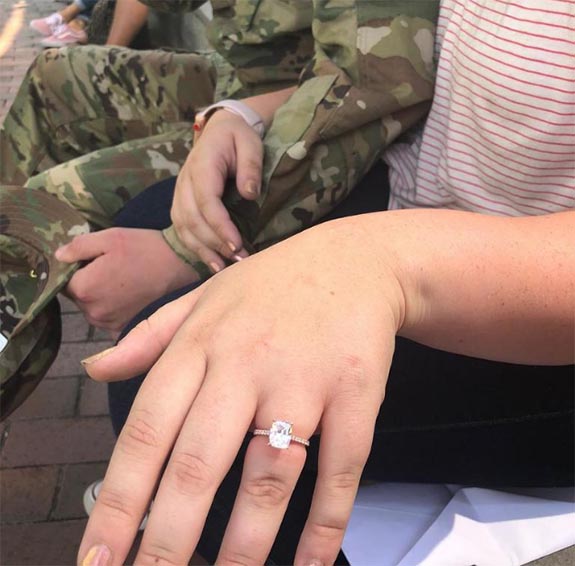 Along with three photos and a video, she wrote, "I’ve never been so excited to say yes to something in my entire life. I can’t believe today was real life and I have a permanent smile on my face. This man has made me the happiest girl for the last two years, and I love my little family more than anything." 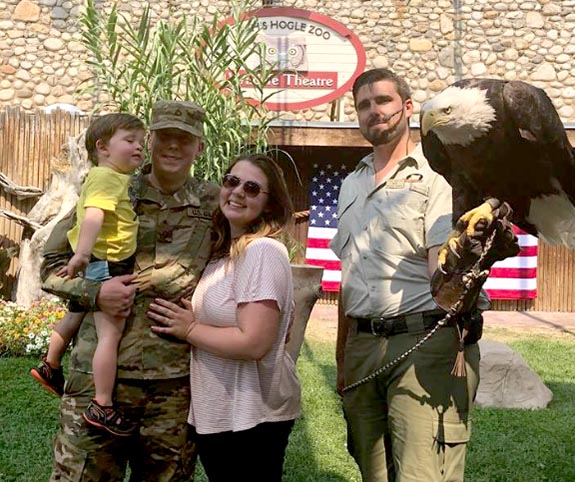 She also had kind words for the staff of the Hogle Zoo.

"They made this moment so magical and perfect," she wrote.

The full video of the raven proposal can be seen at Forsling's Facebook page here...