Back in January, Gem Diamonds announced the discovery of a gem-quality, 910-carat diamond at its Letšeng Mine. The D-color, Type IIa stone — which was later named the Lesotho Legend — was billed as the fifth-largest gem-quality diamond ever recovered. The rough gem sold in March for a whopping $40 million. 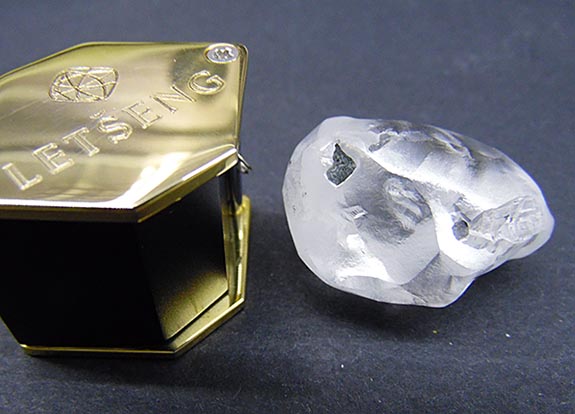 Since then, Lesotho's Letšeng mine has been riding a wave of 100-plus-carat discoveries, the latest of which was a 138-carat, top white color, Type IIa gem (above). It was the 12th 100-plus-carat diamond recovered in 2018, surpassing the previous mark of 11 established in 2017. With four-plus months left in the calendar year, we expect the record will fall again.

The Letšeng mine has earned the reputation for producing large, exceptional white diamonds and generating more dollars per carat than any other kimberlite diamond mine in the world.

Over the past few years, mining companies, such as Gem Diamonds and Lucara, have invested in technology to improve their recovery of extraordinarily large diamonds.

Previously, the mining methods employed to process diamond-bearing rock were not designed to protect the largest finds. The ore was drilled, blasted, hauled and put through crushing machines to get to the gems that may be hiding within. During that process, extremely large diamonds, some weighing hundreds of carats, were often damaged or even pulverized.

Both Gem Diamonds and Lucara recently installed bigger, costlier filters and laser identification technology so huge diamonds can be cherry picked before they go through the crushing process. The investments are clearly paying dividends.

Gem Diamonds maintains a 70% stake in Letšeng mine, with the government of Lesotho holding the remaining 30%. Since Gem Diamonds established a stake in the mine in 2006, the output of 100-plus-carat diamonds has surpassed 60.