Manitoba native Courtney Johnson is harnessing the power of Facebook to find the rightful owner of a three-stone diamond ring her boyfriend found in West Hawk Lake last Tuesday. As of this morning, her Facebook plea had been shared more than 12,000 times. 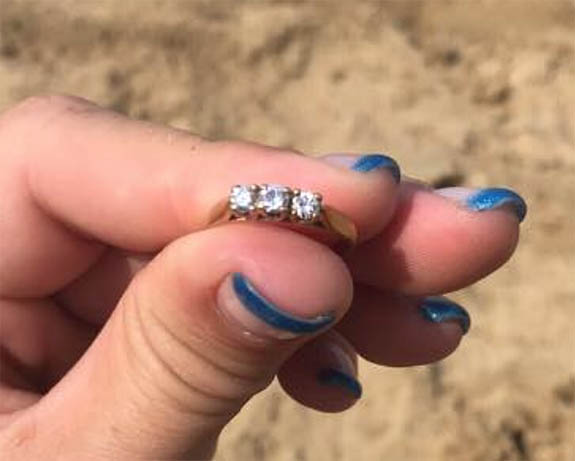 Johnson and her boyfriend were nearly back to shore after swimming in the picturesque lake, about 160km east of Winnipeg, when the eagle-eyed boyfriend spotted something shimmering on the rocky bottom. He leaned over and scooped up the yellow gold, prong-set diamond ring.

"He was looking down because there's lots of sharp rocks and he saw something shiny so he picked it up," Johnson told CBC News.

At first, Johnson thought that she was in the middle of a surprise marriage proposal, but then realized the ring wasn't part of a ruse. The cherished keepsake had been lost by somebody and she was determined to find the owner.

"It was kind of like ‘Wow. Can this be real?'” Johnson told CTV News Winnipeg. “It looks like it’s been in the water for quite some time because it’s really polished."

Johnson noticed that the ring had a few identifying marks inscribed in the band that would make it easier to confirm the rightful owner.

In a Facebook item dated July 4, 2017, Johnson posted a photo of the ring with this caption: "Found in water at west hawk lake. If you can tell me what is engraved inside then it must be yours. Please share!"

Two days later, she updated the post with a bit more information... "It's engraved with a date and something else. The year is 92."

Johnson's Facebook page has become a whirlwind of activity. The lost-ring post had been shared more than 12,000 times and a number of Facebook comments focused on Johnson's character.

Wrote Facebook user Aria Dawn, "You're doing an awesome thing by sharing and posting this! The world needs more people like you. Added Kelly Johannsen, "So kind of you! Hope you find the owner!"

Johnson is pleased with the amount of exposure her story has earned.

"I wasn't expecting that at all, but I'm glad it's being shared because maybe the rightful owner or family will come forward for it," she told CBC News. "If I lost a ring, and even if it was 10 years later or 15 years later and somebody found it, I would be so happy."

When one Facebook user asked Johnson if she might sell the ring if nobody came forward to claim it, she told the user that she would never sell it. She wants to keep it available for the rightful owner no matter how long it takes for that person to come forward.

Johnson told CTV News Winnipeg that she intends to turn the ring in to the RCMP.